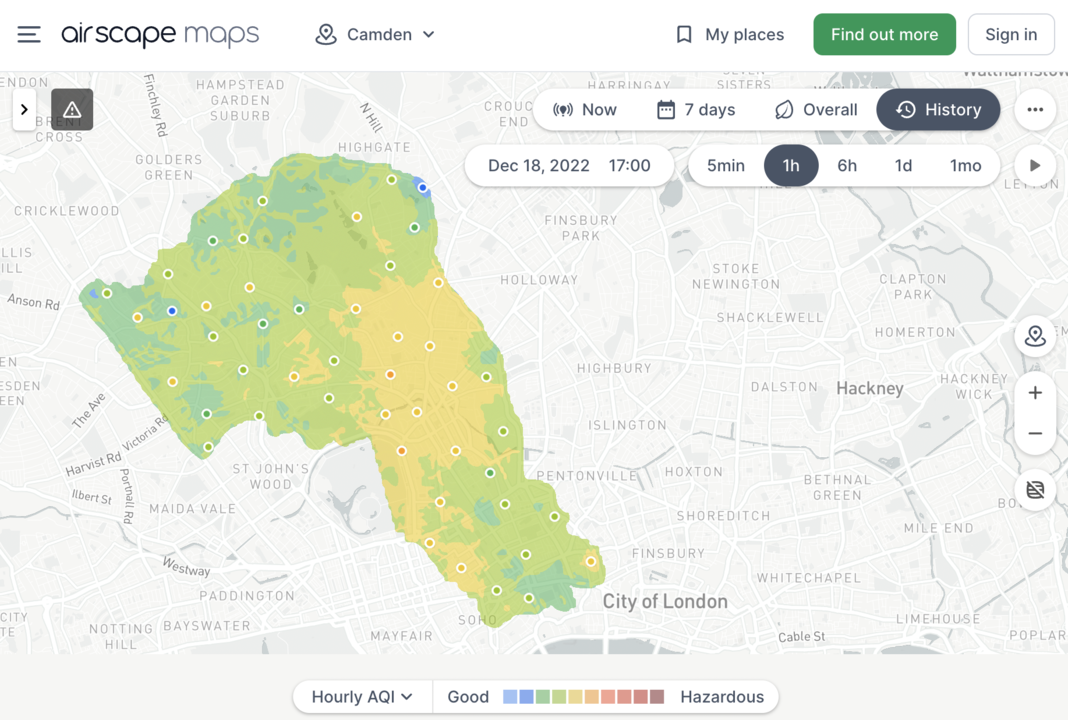 AirScape would like to wish everyone Happy Holidays as 2022 draws to a close. 2022 has been an incredible journey for our company, with data coming in from installations at the Port of Dublin, Port of Aarhus, Staffordshire, and the crown jewel, AirScape’s installation of the world’s largest dense network of air pollution monitoring sensors in the Borough of Camden in London. We would like to present some of the highlights of this year.

During the first quarter of 2022 we were commissioning the system and the first data started to come in. At the end of February we saw a massive shift in carbon dioxide levels across the borough. Very quickly we could eliminate many potential causes such as data quality and local emission. Finally we used a global model of atmospheric meteorology from the National Oceanographic and Atmospheric Administration (NOAA) in the USA to determine the source, a subglacial volcano on Iceland called Katla that turns out to be the largest natural source of CO2 in the northern hemisphere. This plume of CO2 took about half a week to cross the North Atlantic before descending on Camden.

Throughout the year the monitoring network has seen many details of day to day life. Rail strikes in early March meant increased traffic as Londoners used vehicles to go about their business. The network recorded 3 % increase in CO2, 66 % in NO2 and 316 % in PM. During the August rail strike we saw the opposite — many people simply stayed home, and air pollution dropped.

There was a fire on a roof at Chalk Hill Farm in June. We were recording an interview with the BBC at the Camden Locks and the cameraman saw a plume of thick black smoke through the camera. Our sensors were able to record the event, showing when and where it occurred and how quickly it could be extinguished. In addition to air pollution, we hope that monitors such as ours will also contribute to increased public safety in episodes like this.

The largest story of the year in our opinion, is that Camden continues to struggle with air pollution. We see pollution events every day, both large and small, lasting from minutes to days, that are cause for concern for anyone in Camden. We are very glad for the continued collaboration with Camden Clean Air Initiative because we can work together to increase awareness. We are also extremely grateful for the support we have received from the Camden City Council which ranges from logistical support with mounting the sensors, to their pledge to improve air quality for residents of Camden. This includes the pledge to bring Camden into compliance with the new WHO Air Quality Exposure Guidelines.

Thanks to everyone for your support and we are looking forward to new adventures in 2023.