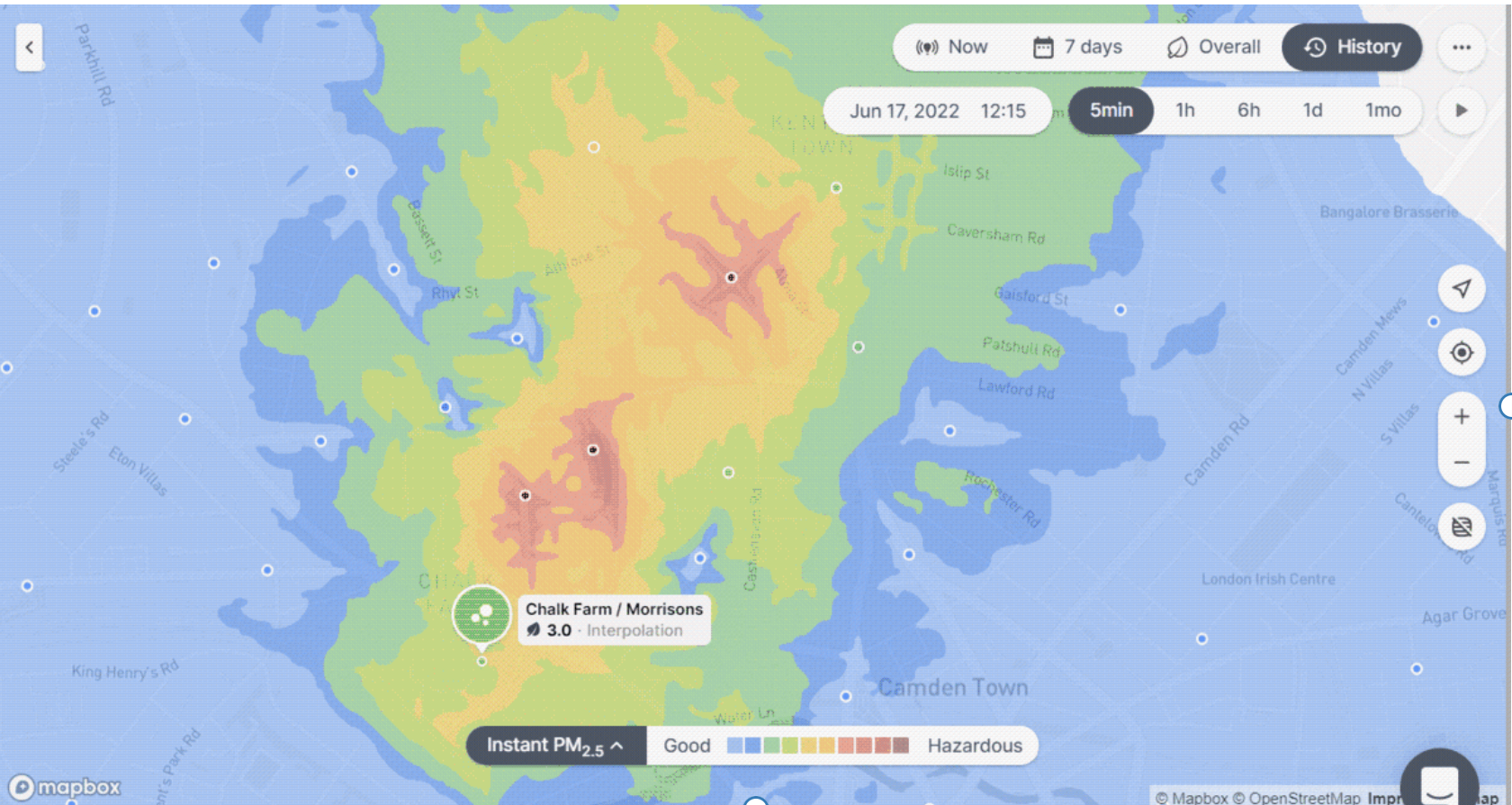 A ground-breaking street-level, real-time air quality sensor network has launched in Camden to fundamentally transform how government, businesses and the public monitor and manage air pollution in urban spaces.

The air quality specialist, AirScape, has installed more than 225 award-winning AirNode air quality sensors across the borough, in partnership with Camden Council and The Camden Clean Air Initiative.

AirScape aims to replicate this approach across London and in every major city around the world, to enable real action on air pollution.

Dr Matthew Johnson, Chief Scientific Officer at AirScape, said: “Air pollution is one of the most profound issues facing humanity today. Tackling this crisis requires policy makers, businesses, and the general public to have a real-time, accurate understanding of air quality through accessible, publicly available data.

“Through this project, AirScape is making the invisible, visible. Our air quality sensor network in Camden delivers ultra-high-definition detail of local air pollution. The network is supporting policy makers to make data-driven choices to protect the health and wellbeing of the local community, whilst giving the public the ability to make informed decisions every day to reduce their exposure to air pollution.

“Camden is a vital first location for the deployment of AirScape, and our ambition is to install networks across every major city in the world, to enable a giant leap in our ability to tackle the air pollution crisis.”

Initial data from beta testing over the past month has already revealed a number of interesting findings. On a micro level, the platform can identify daily ‘incidents’ which occur on one street but not another, and extreme pollution differences in time, shown in rush hour NO2.

World Health Organization (WHO) data shows that almost all of the global population (99%) breathe air that exceeds WHO guideline limits and contains high levels of pollutants, with low- and middle-income countries suffering from the highest exposures.

A recent report by the National Audit Office highlighted that the UK government is not on track to cut air pollution and is not effectively informing the public about the issue, so AirScape could be the ideal solution to meet both challenges by making detailed and impactful air pollution data available to all.

As the first local authority to adopt the AirScape network, Camden Council is leading public engagement on air quality in the UK, and the network is a blueprint for other local authorities to follow suit. The council was also the first to adopt WHO air quality standards, with a host of initiatives already in place to help realise its vision for a healthy and resilient borough.

Councillor Adam Harrison, Cabinet member for a sustainable Camden said: “Reducing air pollution is absolutely vital to improving the health and well-being of everyone in Camden. The detailed data from this network will revolutionise how we can engage with our community, giving us the power to make smarter, informed decisions to tackle air pollution.

“I’d like to thank AirScape, the Camden Clean Air Initiative, Camden’s in-house team of air quality experts and street lighting team for their sterling work in getting this network set up. Making this data freely accessible to all members of our community further demonstrates the council’s longstanding commitment to the open sharing of data in the public interest.”

The revolutionary AirScape approach has been designed to engage a range of stakeholders and the general public in this critical issue. AirScape and The Camden Clean Air Initiative are working together closely to encourage local groups, businesses, NGOs and members of the public to engage with the platform, now publicly and freely accessible at https://airscape.ai.

The data generated from the network can be used in a myriad of ways, enabling the public to choose less polluted routes from A-to-B, feeding into local traffic management policy and providing NHS Trusts and schools with information to help raise awareness of air pollution and protect vulnerable communities. The future possibilities of how the data can be used are vast and AirScape is aiming to engage with potential partners, clean air groups and councils to explore future collaboration.

Public funding to roll out an initiative of this scale to the rest of London and in cities around the world is limited, so AirScape is raising private funding and sponsorship from multiple sources – from individuals to large corporates – to accelerate change and save lives.

Jeffrey Young, CEO of The Camden Clean Air Initiative, said: “Those living, working and visiting the Borough of Camden must be protected from exposure to toxic air pollution. In order to improve air quality, we must first understand its sources – exactly what the ground-breaking AirScape project allows us to do.

“By partnering with AirScape, The Camden Clean Air Initiative has put Camden on the map for GreenTech, giving people across the Borough the opportunity to make informed decisions on how to dramatically reduce exposure to air pollution. The AirScape project aligns directly with The Camden Clean Air Initiative’s vision to fill the Borough with real-time air quality sensors and place Camden at the forefront of London’s sustainability agenda.”

With at least 40,000 premature deaths each year in the UK due to air pollution, toxic air is a known contributor to cancer, heart disease, strokes and asthma. Causing over 20x more deaths than road traffic accidents, poor air quality costs society, businesses and our NHS services more than £15 billion a year. To reflect the increasing scientific evidence of the harm to health caused by toxic air, the WHO sharply reduced its guideline limits for air pollution last year.

The dense network of AirNode sensor devices has been strategically designed to cover the entire borough of Camden, including areas underrepresented by the existing monitoring network and those most susceptible to air pollution – schools, transport hubs, healthcare facilities and busy intersections. Each device measures a wide range of air pollutants including airborne particulate matter and toxic gases (nitrogen dioxide (NO2), and ozone (O3)), giving the full picture of air quality in an area.

Devices are optimally spaced to help identify and differentiate between different sources of pollution, including whether they are localised sources, such as road traffic and wood-burning, or regional sources, such as industry. The devices are installed on lampposts, buildings and other suitable infrastructure and take measurements every minute, enabling detection of the smallest of changes in air pollutants.

The data will contribute to impactful decision making for all stakeholders interested in improving air quality in the borough, from the Council, individuals and communities to schools, offices, hospitals, retail and hospitality businesses.

Air quality is a localised issue, with pollution levels differing significantly from street to street. Even the most advanced air quality networks currently lack a street level understanding of air quality and gaps in the data mean that communities are missing the complete picture when it comes to air quality outside their homes, schools and offices.  AirScape’s vast network has been designed to dramatically improve coverage of air quality, which is now available across the entire Borough of Camden.

For more information, images or to speak to a spokesperson from AirScape please contact:

1 March, the day of tube strikes in London, forcing people to use road transport.

Unhealthy levels of Ozone were building across the Borough on Friday, 17th June, the hottest day of the year so far when it would have been advisable to stay inside.

That same day, a large fire on Chalk Farm Road, could be seen on AirScape igniting and being extinguished, with a plume of harmful PM2.5 moving with the south westerly wind to the northeast.

AirScape is a leading pioneer in air quality monitoring solutions.

99% of the world’s population is exposed to unsafe levels of air pollution. AirScape’s mission is to empower a generation to make informed quality of life decisions with reliable air quality data.

Its international team of atmospheric chemistry scientists and sensor specialists has developed cutting-edge measurement and visualisation technology with high temporal and spatial resolution. A real-time solution for use by governments, businesses and individuals to tackle the problem of urban air pollution.

AirScape is headquartered in London with R&D labs in Copenhagen.

About The Camden Clear Air Initiative

The Camden Clean Air Initiative is a non-profit action group aiming to improve air quality across the Borough of Camden. By working closely with the entire community, including schools, businesses, and residents, as well as the local authority, they provide resources and support alongside their clean air projects. Their projects increase awareness and education around air pollution, and aim to introduce policy and infrastructural change, to propel Camden forward as a Borough of excellence.

Camden was the first local authority to commit to the ambitious World Health Organization air quality standards and as part of ‘Our Camden Plan’ have committed to creating a borough in which no one suffers ill-health as a result of the air they breathe.

Information on air quality in Camden can be viewed on the Council website: https://www.camden.gov.uk/air-quality#lqxu